What if one morning you look in the mirror and no longer recognize the person looking back?

When Leelo can no longer identify herself by the roles that once defined her, it’s both terrifying and liberating. Oh, she feels the loss, the grief, and then the anger, but when she inherits property up north, she jumps at the promise of freedom and independence.

Yet not everyone in her new community is what they seem, starting with the surly mountain man down the road.

As owner of the local fishing lodge, Roar is content with his everyday life. And the older he gets, the less he appreciates change. So when a blue-haired, tattooed ‘city girl’ moves into the old motel, shaking up his daily routine, he’s none too pleased.

Still, something about the woman’s easy smile and almost reckless grit has him step up as her keeper.

A flash of blue to my left catches my eye and I almost drive off the road, when I see what I assume is my idiot neighbour, struggling with a tarp on the roof of the motel. In the middle of a goddamn thunderstorm. To emphasize my point, a loud crack accompanies the blinding flash of a lightning strike, and I watch the woman go down. Son-of-a-bitch.

I swing the truck around and rush toward the building, getting my teeth rattled when I hit that damn pothole in the middle of the drive. There goes my suspension.

A ladder is down on the gravel, and I pick it up, lean it against the eavestrough and climb up. I’m not sure what I’ll find, whether she’s hurt or what. All I can see is one foot wearing a pink sneaker stick out over the edge.

“Get your damn arse down here, you fool woman!” I call up, tugging on the foot, which is immediately pulled back before it kicks out at me violently.

“Don’t touch me!” she screeches in a high pitched, panicked voice.

“Settle down,” I yell over the din of the storm, grabbing onto her ankle when her foot comes precariously close to breaking my nose. It wouldn’t be the first time that happened, my nose has seen action before. “Let go of the tarp and slide toward me.”

I take a deep breath and throw a pleading look for patience up to the dark skies when another flash of light crackles the air.

“Won’t matter if you get yourself killed first. Now let the damn thing go and slide towards me.”

I step one rung higher so I can see the woman lying face down on the roof. First thing I notice, because it’s damn hard to miss, are solid legs and a sizable ass in army fatigues. Beyond, just a bright blue ponytail is visible.

She doesn’t respond, but sticks her butt in the air as she moves backwards towards me. I carefully guide the foot I was loosely holding onto a rung on the ladder, about three above the one I’m standing on, and she manages to swing her other foot down to join the first. I have to turn my head to the side or I’d have my nose pressed into that ass and that’s a bit much for a first introduction, even for me.

I keep my arms braced around her as we slowly make our way to the ground, the blue tarp blowing off the side of the roof. With my feet on solid ground, I put my hands on her hips to help her down the rest of the way, dropping them the moment she turns around to face me.

I barely have a chance to take in her soaking wet, bedraggled appearance when she throws her arms around my neck and starts sobbing into my chest. What the fuck am I supposed to do with that? But before I have a chance to figure it out, she releases me and takes a few steps back.

“You reek,” she spits out disgustedly, crinkling up her nose. “You smell like shit.”

“You’re welcome,” I fire back, good and pissed. This is why I don’t do women, they’re confusing as fuck. Bawling warm and helpless in my arms one second and spitting venom the next. “And maybe it’s because I just spent all morning servicing Charlie’s drain.”

A look of shock registers in her blue eyes as her mouth falls open.

“Look,” she says, lifting her hands defensively. “I don’t know who you are, but I’m pretty sure your Charlie wouldn’t appreciate being talked about like that. And also; eewww!”

The disgust on her face would be comical if she hadn’t already pissed me off. Without a word, I turn to my truck. I have some tools in the box in the back. The woman clearly thinks I’m leaving, because she hurries after me.

“Go inside.” Her eyes go wide at my growled order and her arms fold defensively around her waist. Arms I now notice are both covered in ink. Bold, bright and colorful ink. Great, a damn hippie.

“Rude!” she spits out, closing a pair of full plum-colored lips into a straight line.

“Lady, just get in the house and get dry.”

I turn back to my toolbox to find my staple gun, when I finally hear the crunch of her sneakers on the gravel moving away. It takes me a good forty-five minutes to haul that damn tarp back on the roof and staple it over the hole. By the time I lean the ladder on its side against the wall under the overhang, I’m soaked down to the last thread. There’s one bonus; the stench of sewage is well and washed off.

I haven’t seen or heard the woman since she finally marched herself inside, so I go in search of her. I know the house is behind the bar, since I have some good memories there; watching the occasional Sunday night game with Sam and a bottle of Glenlivet.

The door to the bar is closed, so I walk around the side of the building and find the side door into the kitchen open. The bar and the house are separated by an industrial-sized kitchen. Sam only used the fryer and the grill, for wings, fries and burgers; the only thing he’d serve if he was in a good mood. From the kitchen, I find the door to the living room beyond open and step inside.

Nothing has changed, other than the color on the walls. The yellowed old wall paper is replaced with a putty colored paint, that actually makes the space look bigger. The furniture is the same, though. Old and ratty.

On the old grey tattered couch, the woman is lying curled on her side, apparently sleeping. I’m struck by how different she looks with her face peaceful instead of disgusted or panicked, and I take a minute to look her over. Her hair, which she had in a lopsided ponytail earlier, is now loose and partially covering her face. Dark, almost auburn morphing to bright blue halfway down the strands. Those plum lips that were clamped shut so tight earlier, are now relaxed and slightly pouted, a perfect focal point in her pale round face. I can’t see her eyes, but I know they’re a bright blue. The color of a morning sky.

Without waking her, I turn on my heels, make my way straight back outside, and get into my truck. 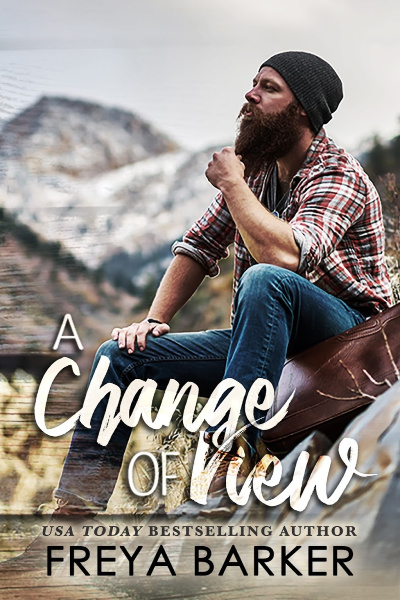